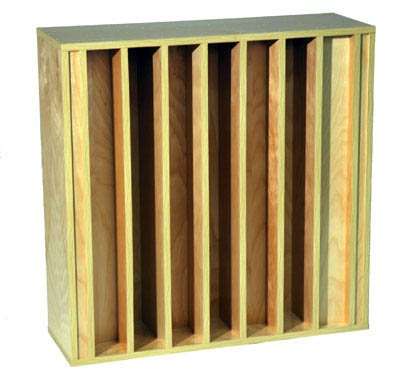 In 1983, RPG Diffusor Systems, Inc. introduced the first commercial sound diffusor that offered uniform scattering over a designable bandwidth. The QRD® has now been used in thousands of projects in a wide range of venues. As with any technology, research and experimentation lead to advances. The QRD® is a reflection phase grating formed from the periodic repetition of a base shape, consisting of a series of wells of depth based on the quadratic residue sequence, separated by dividers. While periodicity is the basis of the QRD®, it is also one of its limitations, because periodicity causes lobing in specific diffraction directions. To minimize this lobing, which compromises the uniformity of the polar response, RPG developed the Modffusor™. By contrast to a QRD® periodic array, a Modffusor™ aperiodic array is formed by following the prescription of an optimal binary sequence, which indicates when to use the asymmetric, optimized base shape or a flipped version (rotated 1800 about the surface normal). The shape optimized Modffusor offers significantly better performance than a low-prime, number theoretic QRD® diffusor and the aperiodic modulation minimizes lobing non-uniformity caused by periodicity. Thus, the Modffusor™ offers the next generation of high performance reflection phase gratings.

Quadratic Residue Diffusors (QRD®) owe their diffusing ability to the phenomenon of diffraction from a periodic reflection phase grating. The product of the number and width of the wells defines the diffraction directions and the energy in these directions is equal due to the fact that the quadradic residue well depth sequence has a flat power spectrum. To cover wide areas, the QRD® is repeated. This periodicity decreases uniformity by focusing the energy in the diffraction directions (B), preventing uniform diffusion (C) from being achieved.

Solution
To solve this problem, RPG patented a new modulated optimized diffusor called a Modffusor™. The Modffusor embodies two patented RPG inventions, namely Shape Optimization and a concept called Aperiodic Modulation of a Single Asymmetric Base Shape. The optimized, asymmetric base shape of the Modffusor, consists of 7 full wells and two zero-depth, half-width wells on either end. Since periodicity, the regular repetition of an element, reduces diffusive performance, RPG utilized the Shape Optimizer to form an asymmetric, diffusively optimized surface, that is no longer bound to the restrictions and constraints of number theory. This optimized surface is now arrayed in an aperiodic manner, using binary Code Division Multiple Access (CDMA) modulation techniques. CDMA systems are used in mobile telephony to enable multiple users to use the same transmission bandwidth. Of interest here are so-called spread spectrum techniques. Spread spectrum techniques take frequency (spectral) components and spread them over a frequency bandwidth. If the lobes generated by a diffuser are viewed as spatial frequency components, then when spread spectrum techniques are applied, the lobes will be spread spatially. This is a significant advance of QRD number theory technology, which directs scattered energy into specific diffraction directions (grating lobes). In the Modffusor, the spread spectrum modulation of one asymmetric, optimized base shape enables the scattered energy to be distributed in all directions (all spatial frequencies). This is accomplished by assigning a binary zero to the asymmetric, optimized base shape and a binary one to the flipped shape (rotated 180° about the surface normal). Installation of an array of Modffusors to cover a given surface area is accomplished by following the prescription of an optimal binary sequence with good aperiodic autocorrelation, provided by RPG. It there is a zero in the sequence the base shape Modffusor is installed, and if there is a one in the sequence the flipped version of the Modffusor is installed. Using aperiodic modulation, the performance of the single optimal base shape can be preserved, while covering an infinite area. The patented half-width, zero-depth end wells provide seamless tiling and the appearance of pseudo-periodicity and pseudo-symmetry, which is aesthetically pleasing.

An example of how a generalized, single, asymmetric diffusor can be flipped according to the prescription of an optimal binary sequence (1 base shape, 0 flipped shape in red) to form an aperiodic diffusive surface with minimized lobing.

The base shape is installed when there is a zero in the sequence and the flipped shape is installed when the sequence value is a one. The joining of the two zero-depth half-width wells gives the appearance of periodicity for a pleasing visual appearance, however, acoustically the array is aperiodic with optimal diffusive performance. The Modffusor represents the state-of-the-art in diffusor design, overcoming all of the shortcomings of periodic, number-theoretic QRDs.

The Modffusor exhibits minimal absorption with a slight rise between 500 and 630 Hz, due to pressure gradient absorption between resonant and non-resonant wells. If a panel fabric is placed over the surface, then this resistive element increases the absorption significantly in this frequency region.

Diffusion coefficient comparison between a traditional QRD and the Modffusor, reveals significant performance improvement, due to the reduction of periodic lobing. A flatpanel response of comparable size is also shown to indicate the Modffusor’s better low frequency diffusion, as indicated by the onset of diffusion.

Installation
The Modffusor is typically mounted on a cleat and secured. For installations that require a flush mount the units are framed out much like an opening for a window. 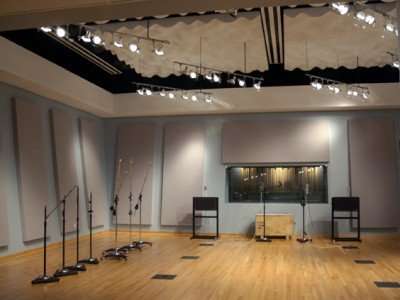 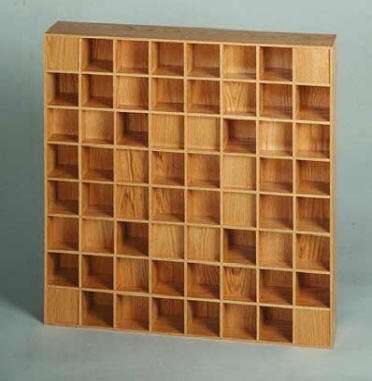 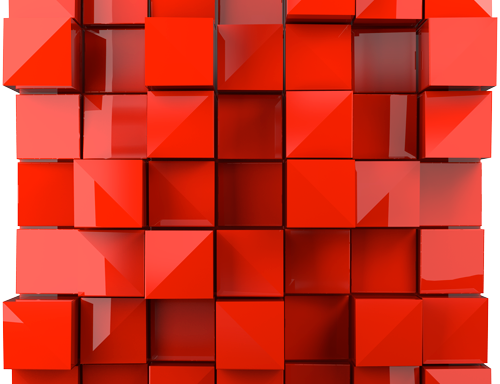 << return to products
Back to Top